Well what a day! It is difficult to know where to start today so let’s go with the fantastic news of the arrival of Mama Ramsey’s baby.  She arrived not long after yesterday’s blog was written and we had been praying for her. At that time she was quite firmly stuck, but after being moved from the local clinic to the hospital she arrived very quickly and is a healthy 3.5kg little girl.  She has been named Nicola after one of our team members who has been very much involved in supporting Mama Ramsey.  What a lovely tribute.

We arrived down at the office in good time this morning only to find that we didn’t have a key to get in. Kim and Joyce had been very busy at the hospital with mother and baby and in all the rush this morning, had managed to lock the office key with their house keys inside their house!  Ray and Dewy were despatched with them to try and get into the house to find the office keys.  Kim and Joyce live in a compound and all the doors are locked with padlocks, and so this was what needed to be “picked” or cut.  Fortunately a neighbour happened to have a hacksaw and Dewy and Ray set about cutting the bar so that the door opened.  The office and house keys were subsequently retrieved and they returned with them to the office.

This was only the first stage of the saga.  By this time we had about 50 children around the office waiting for the planned activity morning.  The majority of these seemed to be around Caroline who was sitting on the doorstep having her hair braided by many little hands.

To open the office door over here, you out your hand through a flap and unlock a padlock which is actually inside the door.  David put his hand through, with the keys, and promptly dropped them on the inside of the office!!  This meant that we were now back in the same situation all over again, ie standing outside the office door with no keys.  Kim and our lads returned to his house to get the spare key whilst David, wishing to redeem his error, biked off to find a huge magnet which he attached to a long loop of wire to put in through the flap in an attempt to reach the keys and pull them back out.  As the door is made of metal, this wasn’t the most practical method of retrieval and fortunately Kim returned very shortly after with the spare key and we were able to get in. 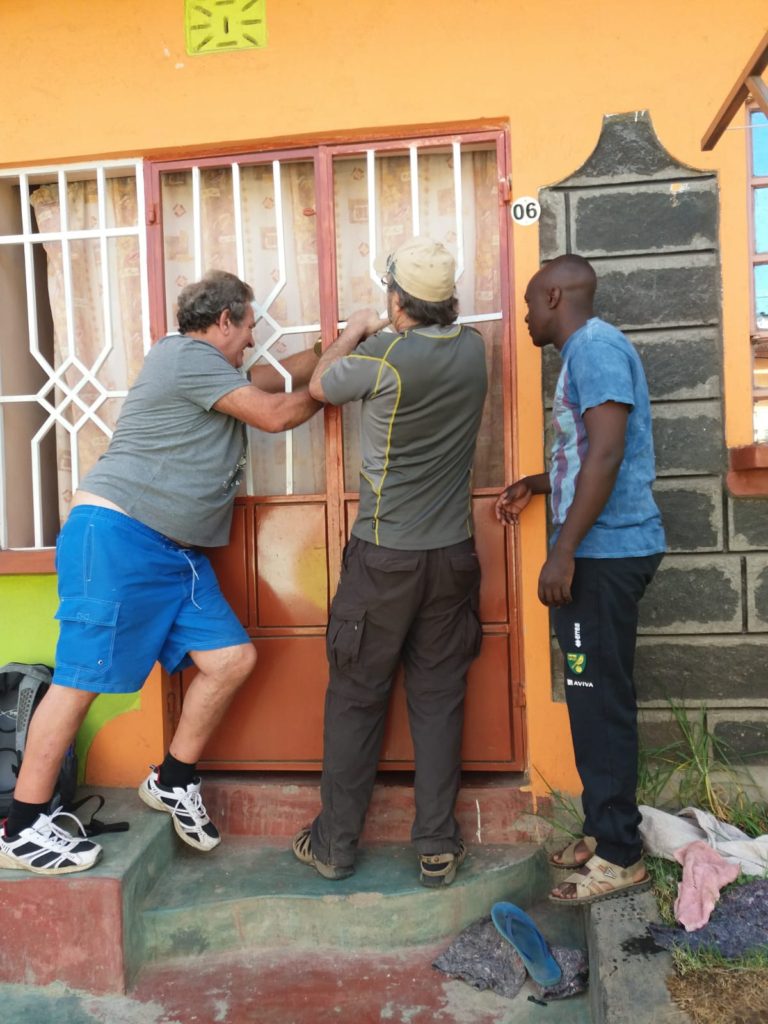 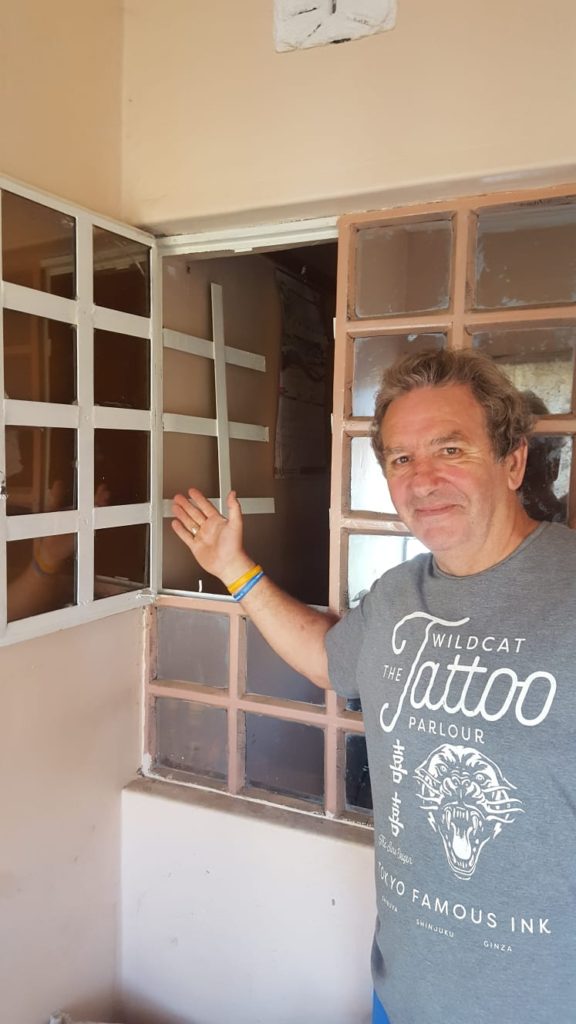 Once inside, we collected all that we needed for the children’s activity morning, ie footballs, craft materials, rope and a parachute, as well as some tee shirts to give away.  Once we had all the kit, we set off for our venue – with all the children!  This involved crossing a railway line, and the main Nairobi to Nakuru highway which is a fast dual carriageway.  Obviously, we had completed the relevant risk assessment (not) and we corralled all the children ( now between 60-70) into one big group, waited for a space in the traffic and made a dash over the first carriageway.  There is a dry grass central reservation on which we regathered before once again taking our lives in our hands to cross the second carriageway.  Again, we waited for the gap and then ushered our little charges across the road.  It hadn’t occurred to us that we needed to particularly worry about us adults, but Dewy in true Dewy fashion, managed to spill the contents of his backpack on the road. This included his bottle of water which started to roll away, so he was chasing it down the road and kicked it into the sewage drain.

Once this had been safely retrieved and we all reached the other side, much laughter ensued – and this was all before 10am.

A further group of teenage lads were waiting for us at the school sports field bringing our number to about 100.  The lads played football, whilst the younger children split into groups and had a good time playing hockey using water bottles as sticks, playing on, under and in the parachute, and making little card bracelets from rainbow scratch bands and then some races. This was a wonderful, chaotic but very happy couple of hours, before we repeated the whole process to get them all back over the road and safely home.

As we somewhat wearily headed back to the hotel, a young man on a motorbike pulled up beside us to have a quick chat.  Dewy recognised him as someone who had helped us up at The Haven yesterday.  Ray thought he worked up at the hotel, either way, we were fairly sure that we knew him.  Ray asked if anyone wanted a ride up the very steep drive to the hotel and Daph said that she would be glad to take up the offer , as long as we were sure that we knew the man and he wouldn’t drive fast.  (Obviously they don’t wear helmets over here).  She hopped on and gave us a very regal wave and headed off into the dust.   The rest of us continued our walk, and began to question who the man actually was.  It became evident that he was from the Haven not the hotel and so we were worried that poor Daph might be heading 5 miles up the road.  We waited anxiously for her to arrive and after a few minutes she duly turned up, much to our relief. 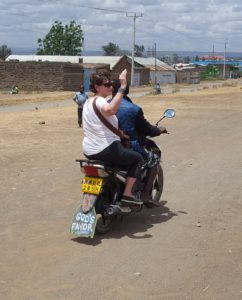 This afternoon we popped down into Nakuru town to collect the African dresses that the girls had had made in readiness for church tomorrow morning.  We also bought most of the equipment that we will need for our home makeovers on Monday.  Tomorrow morning we are all off to church at 8.30 and in the afternoon, some of us will be using the sewing machines over here to make curtains and cushion covers ready for Monday.  But more of that tomorrow …….